Do you know what Stroopwafels are? Well, I didn’t either until I went to visit my Dutch friend many years ago, and she had stocked up for the occasion. They are cookies, consisting of two thin waffle-ish wafers, glued together by a generous layer of caramel syrup. Yummy. And very Dutch.

The last few days my friend challenged the EHEC-threat to visit us here in Hamburg – and of course she brought some Stroopwafels with her. (This is by the way the same woman who sent me sex packages of Stroopwafels when I was pregnant and had all sorts of crazy cravings…!) So – now the kids are indoctrinated by the Stroopwafel-mania! I commented on how easily they fell for this novel cookie on Facebook, and my friend commented (from the guest bedroom, which added an extra dimension of nerdy humor!) that the Stroopwafels were actually the Dutch people’s scheme for conquering the world – first making everybody dependent on Stroopwafels, and then using the cookie supply as leverage and means of power…

Ah – acute silliness! But the silliness was really relieving – especially since most everything else these days seem to evolve around the EHEC-outbreak, which has its epicenter right here in Hamburg. To tell you the truth, I think it’s really brave of my friend to travel to THIS city, RIGHT now. I’m not sure I’d be as brave as that, if it was the other way around – I’m really chicken when it comes to these things. Another one of my Twitter/Facebook-remarks this last week was that I was disinfecting my hands, kitchen surfaces and tools with alcogel so frequently, I was afraid the food would taste like booze. And while that was of course just another remark of silliness – I think I’ve used a whole bottle of alcogel already.

(I remember in the days of the swineflu, I was working in an open office space with shared cubicles, and every now and then during the day there’d be a smell of alcogel – when my colleague felt the need to disinfect his hands in protection. I quietly sneered a little about that back then – but I’m sure not sneering now!)

Either way – part from the obvious catching-up-factor (my friend and I hadn’t met in 8 years – she said I wasn’t even pregnant when she visited us in Stockholm, so that must’ve beein in the early fall of 2003!), an other good thing about getting visitors is you finally end up doing all the ”staycation” sightseeing that you never get around to doing for yourself.

Die Kunsthalle – ”art museum” for those of you who need a translation – was really interesting. I had the privilege of walking around with my friend who had at least taken an introductory course in art history, and could tell me a few things about what we were looking at. Personally when seeing art, I tend to focus on what the imagery ”tells”, the stories in the paintings. (Anybody surprised about that? Nah, didn’t think so…!)

But I realised that I would be able to see so much more of those stories, if I knew a bit more about the context in which they were conceived… So – while there will be absolutely no time for me to study art history in the next school year – it’s suddenly on the wish list for what I want to study 2012-2013, at least as a tasty little side-order…!

The German Herrentag is a variation on the theme Father’s day – and basically means that men pack a box or a cart full of beer and booze and head out into the sunshine along with their (male) friends. The 2011 Herrentag was yesterday, and was quite a nice day for it – although I believe the sun might have made the booze a tiny bit too effective for some of them…

But some just seemed to enjoy the weather in a nice, literally laid-back way…! 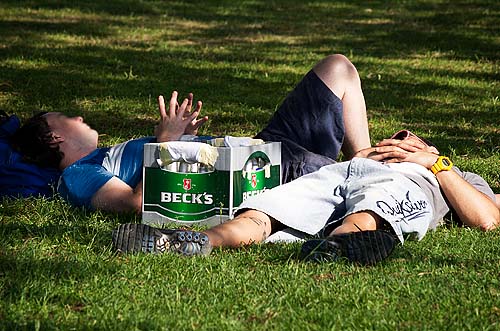